Did You Miss The Boat For Bitcoin?

Are you enjoying the current bull run of Bitcoin? Or are you hitting head against the wall, because you still don’t own any BTC?

If you’re the latter, you probably tell yourself “Bitcoin is too expensive now, I’ll wait for a dip”.

But do you ever buy these dips? If you don’t I’ll lay out a way to get into Bitcoin safely in bull markets later in this blog.

I hope you’re the first though, and you’re eagerly refreshing your Blockfolio like it’s 2017. If you are, Congrats and full sail ahead!

Survived the Bitcoin Bear’s, But Not Without Scars

When the cryptocurrency markets collapsed in 2018, many of you, including myself, saw our portfolios shrink and decided to wait for better times.

Even though I was fully active in the space working on my business. On a personal level, I was staying away from investments till I see better days.

Like bears, I went in hibernation to wait out the crypto winter.

In retrospect, I should have rebalanced my portfolio to be more Bitcoin heavy.

I became painfully aware of this when I logged into old wallets of altcoins like Waves, NEM, and Stratis. I was surprised to see how difficult it was to retrieve the coins I safely secured. Waves even completely removed their Official Dex (waveswallet.io), and my coins are lost forever. On today’s value ($6.30), I have to write off five digits.

It’s even hard to admit how many exotic digital assets I decided to hold, that are still 95% under their all-time high, with some even going to 0.

But Hey, we’re here today. Get back up, dust me off, and let’s go for another bull & bear cycle.

With a new bull market, there are new opportunities. And luckily I still have a decent bag to play with.

What’s Been Going on With Bitcoin?

In a bull market, it’s difficult to point out one factor for a surge in price. Some important growth factors are:

There is a lot more going on than this, but these seem to be the key indicators of the recent price movement.

Governments, especially the USA, keep printing money, causing fiat inflation. In 2020, 20% of all US dollars were printed. With plans in congress to print more in 2021.

Because of this, high net worth individuals, companies, hedge funds, pension funds and more are looking for ways to hedge against fiat inflation. Gold is often used as a store of value (and is up 28% in 2020) and Bitcoin is currently filling that role as well.

Here you can see a graph of how the BTC price correlates with the US dollar strength.

Companies and investment funds now own nearly 5% of all Bitcoins available, which is currently worth: $21 Billion. Companies like MicroStrategy, Greyscale, and Square (from Twitter CEO) are buying and holding BTC as an investment and to hedge against inflation as mentioned above.

This is just the start of companies entering the market. As Microstrategy is already booking hundreds of millions in BTC profits in just 1 quarter, I expect (public) traded companies to FOMO in 2021.

Even Elon Musk is speculating on Twitter about Tesla and Bitcoin, and the CEO of MicroStrategy smartly replied to help him. 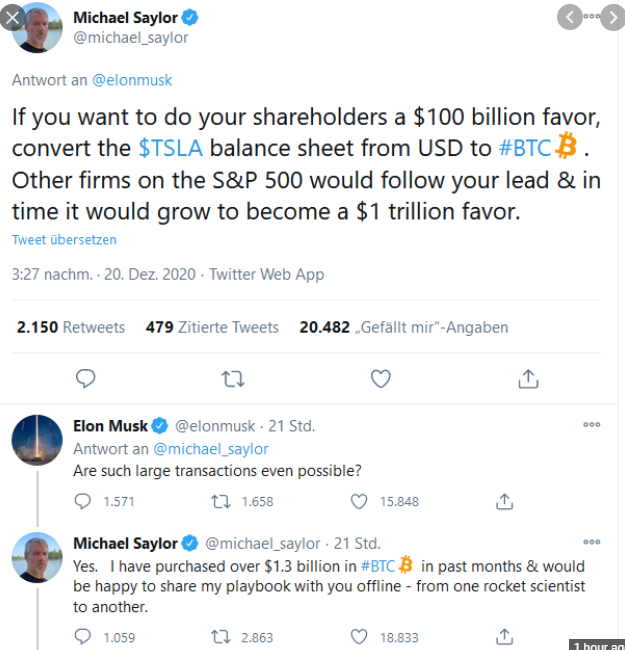 These publicly traded companies bring in millions of USD at once, so a rise of interest in this area has a much bigger effect on the price than the average Joe does.

Not only public companies will drive the price up, but also an investment, hedge, and pension funds will implement a similar hedge strategy once BTC is a proven asset class. I’ve read somewhere that if 1% of pension funds invest in BTC it could drive the price over 150k already. (Don’t hold me to this number).

This payment portal has 350 Million users and will allow users to purchase BTC through the app. They rolled out BTC purchases in the USA in December 2020, and the US based PayPal users are already buying up all freshly mined Bitcoins.

Not only does PayPal make it easier for people to buy BTC, but it also added 21 Million Merchants to the Bitcoin network, which makes it easiest for businesses to accept, buy and sell Bitcoin through PayPal.

A worldwide rollout lowers the entry barrier for people. As they can easily buy, and hold their BTC on PayPal, a platform they already trust.

Venmo (40 Million users, owned by PayPal), is another popular payment portal that will add BTC in 2021, and I believe many more will follow.

This is an important step for the mass adoption of Bitcoin.

In the brief BTC history, the halving of mining rewards has been a catalyst for a bull market. As you can see in the image below, each halving event was followed by a bull market.

Why is that? Less new Bitcoins have been created, which means less selling pressure by miners.

The Stock to Flow, created by PlanB, is a popular model that traders follow. It consists of 2 important parts.

The first: there is only 21 million Bitcoin that will ever exist. There will be no more and no less and this number will always stay static. This makes bitcoin more scarce than anything that has come before it. Other scarce assets are not 100% finite and in some cases, they can be synthetically manufactured.

The second is a process coded into Bitcoin called the halving. Essentially, Bitcoin has its own built-in escrow mechanism where Bitcoin is released and given to miners as a reward for processing transactions. This reward is cut in half every four years.

By doing so, Bitcoin’s rate of inflation is reduced by half each halving and its stock-to-flow ratio is doubled each halving. This process continues every four years until all Bitcoin in this escrow mechanism is released and in circulation. From that point on Bitcoin in circulation will be capped at 21 million. As of the time of writing, there are 18,534,818 in circulation.

So far, Bitcoin’s price has followed its stock-to-flow ratio very closely and if it were to continue on this trajectory Bitcoin’s value could be somewhere around $100,000 in late 2021. And Even as high as $288,000 according to PlanB’s second model S2FX.

The world’s leading provider of indexes for financial markets is preparing to add bitcoin and a few other cryptocurrencies in an Index to offer traders in 2021.

The USA based stock market adding Bitcoin, Ethereum, and Litecoin to an index will allow millions of traders an easy option to get into crypto. It will add a lot of liquidity to the market which will help the market mature. Plus, due to the high volatile character of BTC, it will provide a lot of awareness to traders about cryptocurrency.

As we surpassed the previous all-time high of $20,000, we keep hitting new high after high.  Which got mainstream media reporting on BTC again.

How will the people affect the price of BTC in this bull market once they wake up again?

You can see on the amount of Google searches on Bitcoin, that the recent price surge is not due to mass people getting interested:

We’re now past the psychological point of $20,000 (which was the previous all-time high). So anyone that purchased BTC anytime in 2017, is now finally profitable. The time that people will get excited about crypto again is here.

The price of Bitcoin goes up when there are more buyers than sellers, and visa versa.

On the selling side, you usually have the miners who need to pay their electric bills and hardware. Or profit-takers, people who invested in BTC early and are selling for profit now. And traders/bots who go for short term trades to make money during fluctuations of the market.

Currently, the large buyers are buying into BTC as a hedge or long term investment. Meaning they won’t sell anytime soon, even if BTC goes up.

With just the launch of Paypal in the USA, we already see the Paypal users buying up all mined Bitcoins and the numbers are already increasing in 2021.

The demand for Bitcoin is growing, and the supply is going down. We’re in uncharted areas of price now, so the sky’s the limit…

Is Bitcoin Still a Good Investment?

Great clickbait, but is this realistic?

Without studying graphs myself, I can see several technical analyst (TA) traders, hedge fund managers, billionaires, and banks, predicting prices between $150,000 – $250,000 for December 2021.

Personally, I believe this is true. We’re at the start of this cycle, and with big money coming in there is no telling how high the price can go.

So even though Bitcoin is currently trading around $35,000. It’s still a good entry point. In the short term, we can see some big pullbacks of 30-50%, which we have seen in previous bull markets. However, it’s not guaranteed we pull back. And it’s very difficult to emotionally press the buy button when prices are crashing.

Keep in mind, this is not investment advice but my personal opinion. You need some big boy pants to handle the variance, adreneline and emotion that comes with investing in crypto. So never invest money you can’t afford to lose.

If you’re not good at timing the market, like 99% of people. You should check the common investment strategy called: Dollar-Cost-Average (DCA).

In simple terms, with DCA you have several buy points over a period of time, so you buy the average price of that period. So basically it’s the opposite of timing the market.

If you do want to time the market, I suggest following a few traders on YouTube that talk about the support and resistance levels to decide a decent entry point. I personally like Ivan on Tech or Madelon Vos (in Dutch) for this. Both of them use fundamentals, on-chain data, and financial world news on their topics. And I enjoy their content in general. For more options have a look at this list.

If you missed the boat of 2017 or 2013, make sure you don’t stand by the sidelines today. Jump on board by DCA’ing your way to some Bitcoin holdings over time and enjoy the ride. I use Bybit for my Trading, you can create an account here and collect a big fat bonus.

We’re in open waters right now, desination unknown. Exactly how I like it.

I’ll have more cryptocurrency content coming up soon. So if you liked this blog, sign up to my newsletter.